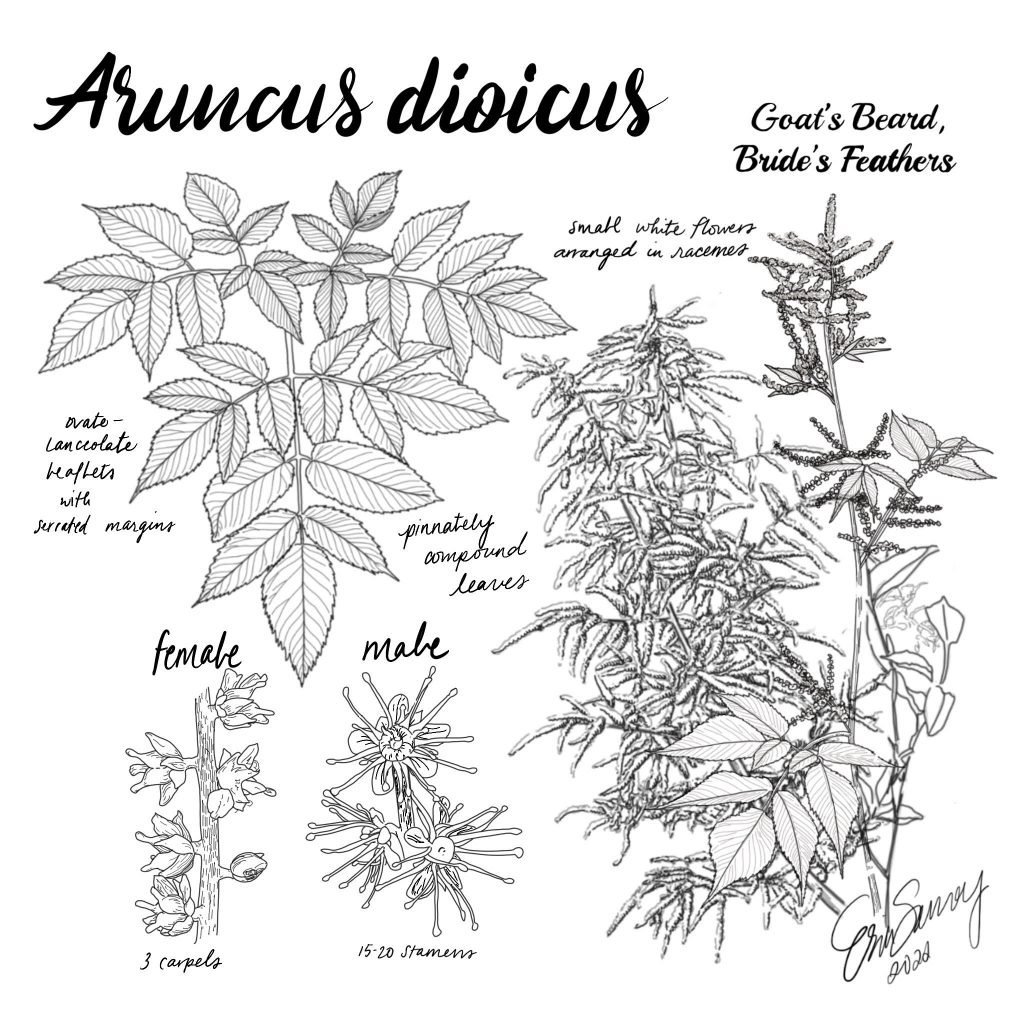 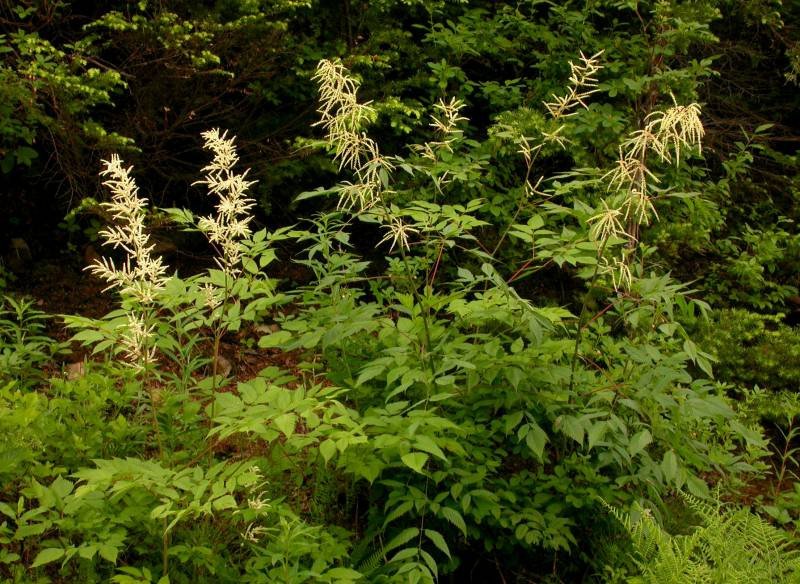 Goat’s Beard or Bride’s Feathers (Aruncus dioicus) is a native perennial herb that grows upright and spreads by rhizomes forming bushy clumps. They sport several smooth stems that can grow up to 6ft tall and bear twice or thrice-pinnately compound leaves that tend to diminish in size the higher they are borne on the stem. The leaflets are somewhere between ovate to oblong-lanceolate in shape, coming to a point with margins that are sharply twice-serrated. High above those leaves are feathery clusters of tiny white-cream colored flowers that grow on long branched spikes, resembling skeletal fingers. 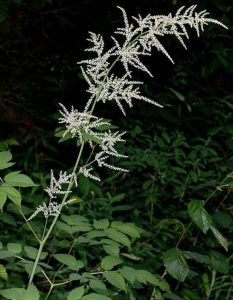 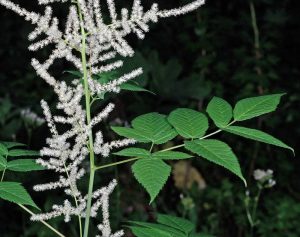 This plant is dioecious, so the male and female flowers are presented on separate plants. The females have 3 reflexed carpels surrounded by 5 petals, while the males have 15-20 stamens with long slender filaments, lending to a fuller look than on the female plants. The female fruits become hard brown little follicles that are about 3 mm long, which ripen around July to August. This species is superficially similar to False Goat’s Beard (Astilbe biternata), but this look-a-like only grows in the southeastern United States and Appalachia. 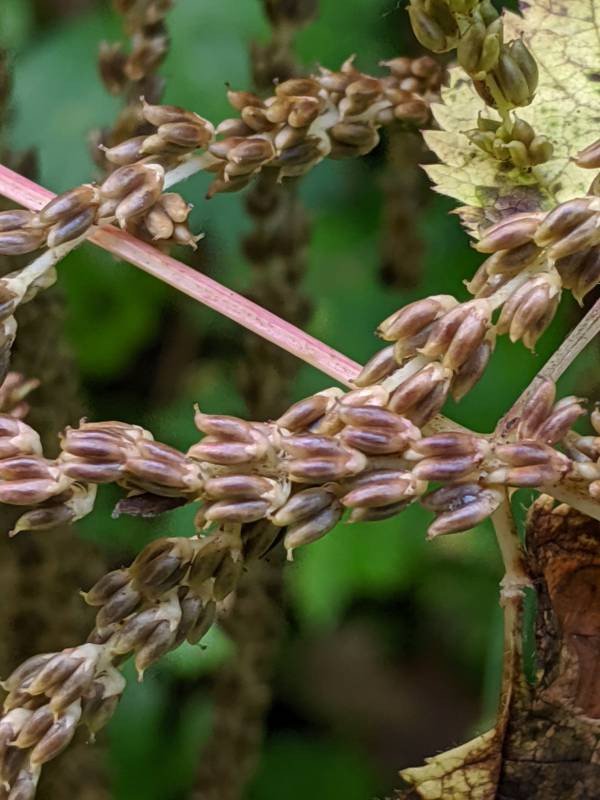 3 carpels mature into follicles that are around 3mm long. Photographed by John A Haskins, 2019. Burke Herbarium Image Collection. 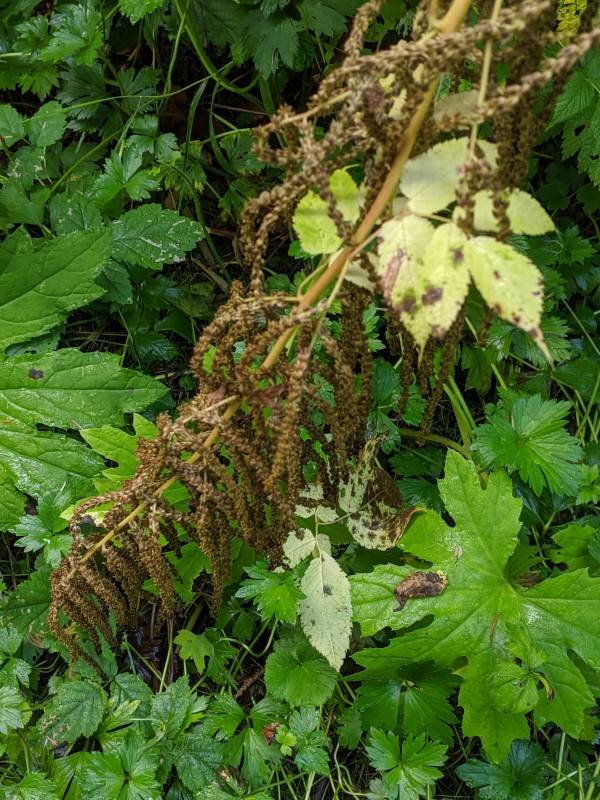 Aruncus dioicus var. acuminatus is our native western variety that is distributed west of the Cascades in Alaska through Canada down to California, east to Alberta. Other varieties of the same species occur in the eastern half of North America. Goat’s beard inhabits moist woods and forest edges, meadows, areas along streams, rocky ledges, in wet ravines, and avalanche chutes from low elevations to the subalpine. They thrive in wet or moist soils of a variety of types; though they will tolerate some drought and seasonal flooding. They like lots of space, with either shade, part sun, or sometimes full sun in the northern parts of its range if enough water is available.

These plants make excellent additions to restoration projects and shade gardens, especially due to the large-scale displays of white blooms from May to June. Being somewhat fast growing and rhizomatous, this plant stabilizes streambanks and aids in erosion control. Aruncus will propagate by seed, but it may take quite a bit of time to grow and become established that way. It can be easily transplanted however, and can also be propagated by root division in early spring or autumn. This plant is pollinated by insects, and is not self-fertile, so both male and female plants need to be planted together if the goal is to put out seed. It attracts various species of butterflies and moths, specifically the Dusky Azure moth, which makes the plant its larval host. Aruncus dioicus is also an important medicine for the Cherokee, Haihais, Ktasoo, with the var. acuminatus being specifically cited by the Thompson Peoples of British Columbia.