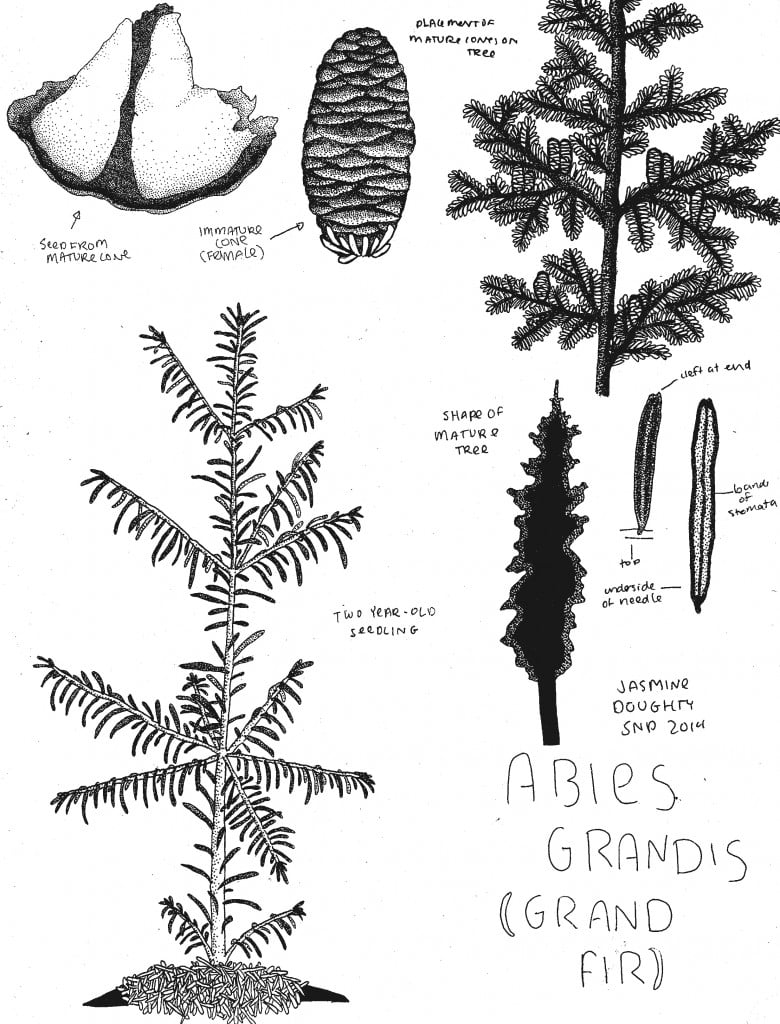 PLANT OF THE MONTH
Abies Grandis
(Grand Fir)
Grand fir is native to the Pacific Northwest from Montana to the Pacific coast and southern British Columbia to northern California, and it inhabits altitudes from sea level to 1800 meters. Unlike Douglas-fir, Grand fir is a “true fir” of the genus Abies. True firs have flattened needles with blunt tips, and they bear sticky, resinous cones that stand uniquely upright near the tips of the upper branches, unlike any other conifers. True firs typically occur at high elevations, and grand fir is the only true fir in the western US that occurs down to sea level. Abies grandis is shade tolerant enough to establish itself under a thick canopy, and once it breaks through the canopy, along with douglas firs, it tends to dominate late-succession forests in this region. Mature individuals usually range from 40-70 meters in height, and have a trunk diameter of two meters at the thickest.
Leaves on this fir are needle-like and flat. The upper side of the needle is glossy dark green but the underside has two narrow, whitish bands of stomata that run lengthwise. Each needle has a miniscule notch at the end, on the same plane as the middle vein. Leaves are arranged on the branches in a spiral, but each leaf twists at the base, creating a distinctive appearance of two flattened rows of needles that seem to alternate between short and long. The mature crown is usually narrow and dense. This tree has both male and female cones- the male cones cluster underneath the needles, while the tall female cones stand upright above the needles and are much larger.
When true fir cones mature, the cones shed their seeds while still borne on the branches, unlike Douglas-firs and other conifers. The seeds fall into the litter below the parent tree, where they spend the winter. During this time, the seeds stratify, which means that frost and weathering soften the hard seed coat so they may sprout. Because of this process, the seeds are not viable past their first spring.
For current availability of grand fir, click here.
Posted in Plant of the Month