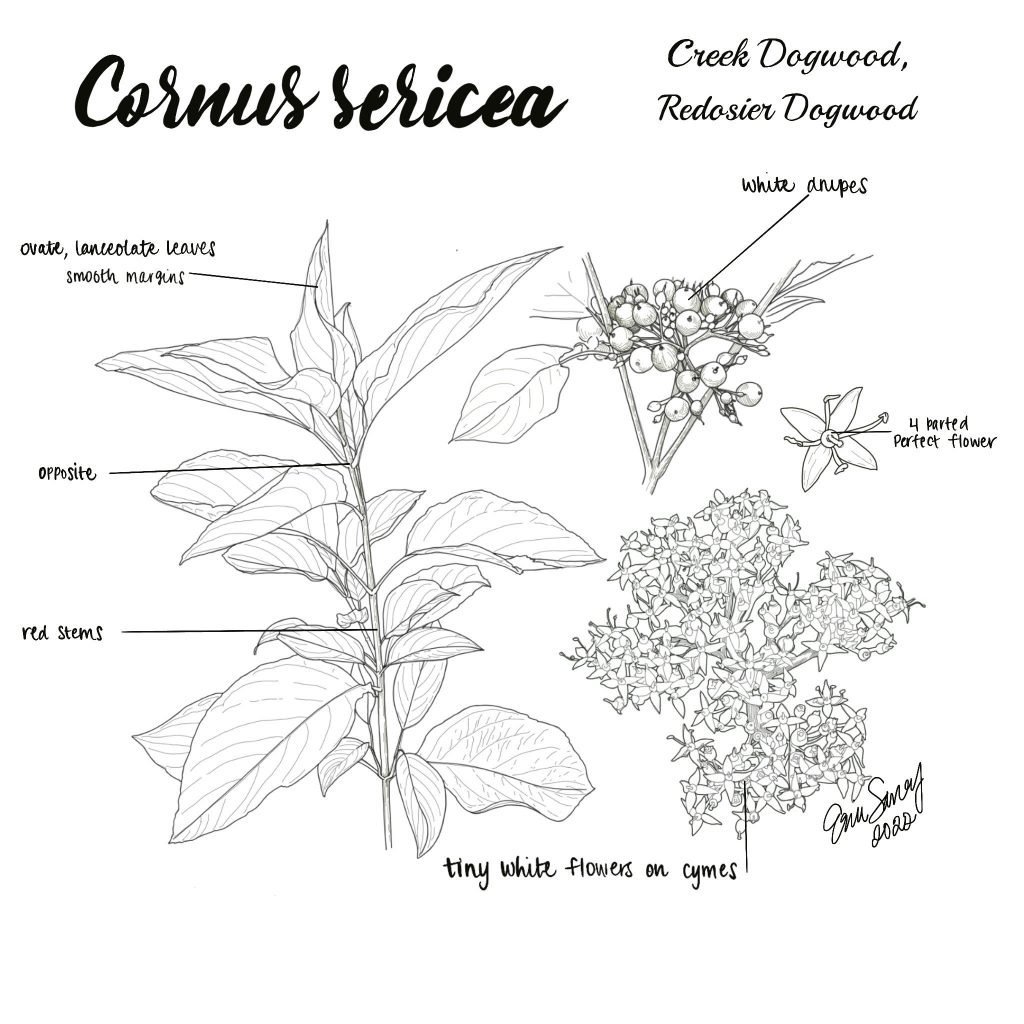 Cornus sericea (Redosier Dogwood or Creek Dogwood) is a deciduous, multi-stemmed, erect but loosely spreading shrub that can grow from 3 – 20 ft tall, and often just as wide. It forms dense thickets by sending out stolons, sometimes as far as 10 ft away from the parent plant, in addition to prostrating roots from its lower stems and branches. It has graceful and delicately thin branches (less than 2 mm in diameter) covered with a conspicuous red bark, which is even more noticeable during the winter months. 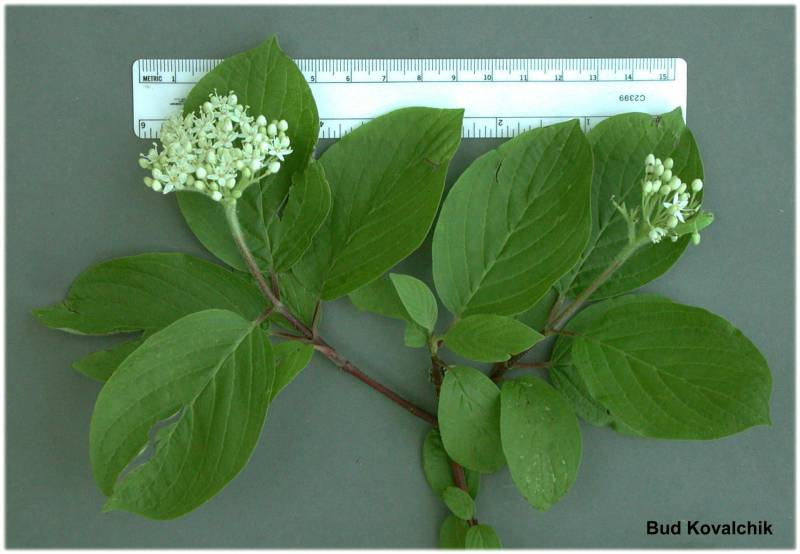 There is a layer of fine hairs on the tops of the leaves and lining new twigs, which is useful for identification. Leaves are simple, entire, mostly oval and coming to a point, and arranged oppositely. Small, 4 parted, perfect (male and female parts present) flowers are borne densely clustered in terminal, flat topped and slightly rounded creamy white cymes. These inflorescences produce white berry-like drupes, typically with 10-30 fruits per inflorescence. They often send out flowers twice during their growing season from May – June before the fruits become available by about November. By that point, the foliage turns a deep reddish purple. 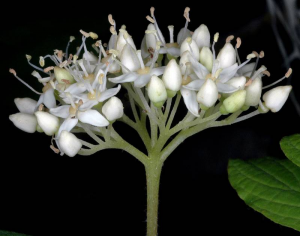 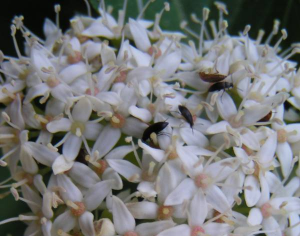 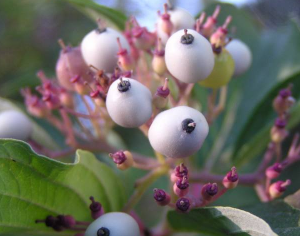 This is a wide-ranging plant that is native in the northern latitudes of North America, spreading from Alaska and northern Canada as far south as Virginia, southern California, and Chihuahua, Mexico. In the southern part of their range they mainly grow in the riparian areas, flood plains, and moist valley bottoms, canyons and ravines, as they can be sensitive to temperature and drought. Redtwig dogwood thrives in moist to wet areas such as shorelines, meadows, floodplains, marshes, swamps, bogs and fens, in addition to being found in forests, woodlands, shrub thickets, and sand dunes and grass communities. There are a couple distinct seasonally flooded riparian forests ecosystem types in which it can be found locally: Sitka Spruce (Picea sitchensis) and Skunk Cabbage (Lysichiton americanus) or Black Cottonwood (Populus trichocarpa), and Taperfruit Shortscale Sedge (Carex leptopoda) are the most common types in the western Cascades. Other species it associates with are Aspen, Willow, and Redwood. The ability to tolerate a wide range of conditions, in poorly drained soils with high levels of nutrients lends this plant to being an excellent addition to our stormwater facilities, though they may need irrigation in the hot months of summer. 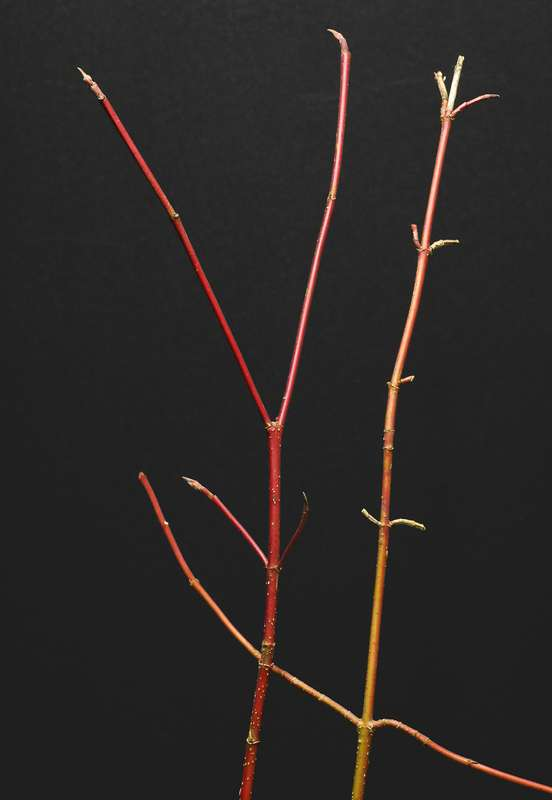 Creek Dogwood is an indicator species in many of its ecosystem types. In British Columbia it indicates the presence of moist to wet, nitrogen-rich soils and friable forest floors, and especially of active floodplain sites in the Vancouver region. This important facultative and obligate wetland species is often used as a key species in inventory and monitoring projects. It will stabilize in low to steep-gradient stream types with fine to coarse-textured soils, and spreads vegetatively by stolons, layering, or root crown starts. Hard cuttings and collected sprouts will regenerate easily without treatment, another reason it is so commonly utilized in restoration and irrigation projects. The new growth is the most striking and colorful, so maintenance by pruning in early spring is a great way to stimulate new growth and keep them aesthetically pleasing in the stormwater facilities. They can behave somewhat weedy once established, so their suckers and stolons may need to be removed from inlets if the flow of sediment is blocked into the facility.

Redosier Dogwood is pollinated by insects including many bee, fly, and butterfly species, with bumblebees being the most frequent visitors. There are certain butterfly species that use this plant as its larval host and food for young caterpillars. It provides cover and food for many waterfowl, marsh birds, shore birds, and song birds, as well as for mammals; though it is sensitive to heavy repeated browsing by ungulates, especially in shrubland types. Lastly, this Dogwood is an important crafting material, food, and ceremonial medicine for the Cree, Ojibwa, Thompson, Hoh, Nitinaht, Okanagon and other First Nations Peoples of Vancouver Island, British Columbia, and the western United States.